Psychedelic drugs are among the most promising treatments for people with conditions like PTSD and severe depression. A new center at The University of Texas at Austin aims to unravel how they work.

Devon and Kelly Thomas’ wedding at a storybook chapel in Simonton, Texas, was, as they say, perfect. The bride wore white, the bridesmaids, teal, and the February air held a hint of spring. But the ceremony followed an unusual proposal: “I told her before we got married that there was something wrong with me that was never going to get fixed,” says Devon Thomas, now 50. 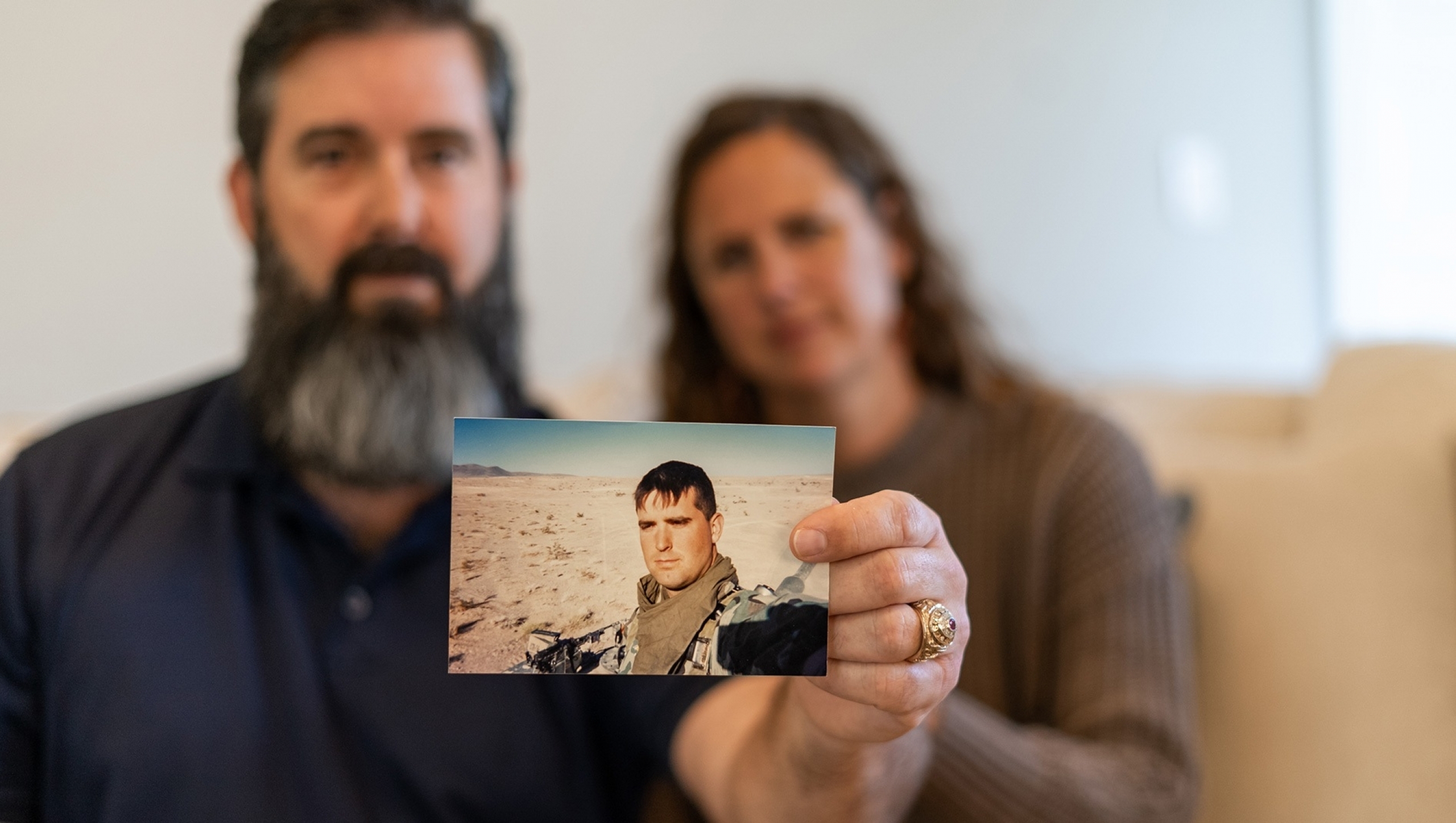 Devon Thomas (left) shows a photo of himself in military fatigues. His wife, Kelly Thomas, looks on.

Back then, in 2015, Thomas was halfway through what would ultimately be a 15-year period of severe anxiety and depression that sometimes left him unable to hold down a job, self-medicating with alcohol and marijuana. It was a bewildering turn of events for the self-described “top performer,” a West Point graduate who was a former U.S. Army Ranger and officer.

I would work at treatment for a while, and then get frustrated because it didn’t go anywhere for me, and then stop.

Thomas tried conventional treatments — medication and cognitive behavioral therapy. For a time, he took testosterone. (“It didn’t go well.”) At one point, he was even referred to a urologist. It was hard to stay motivated. “I would work at treatment for a while, and then get frustrated because it didn’t go anywhere for me, and then stop,” he says.

In January 2021, Thomas hit a breaking point, and reached out to an acquaintance, a former Navy SEAL, who had tried something Thomas hadn’t: psychedelic therapy.

The use of drugs such as psilocybin, MDMA, ibogaine and ayahuasca with a trained provider is a re-emerging practice for treating conditions like severe depression, anxiety and post-traumatic stress disorder. (Psychedelics have been used for medicinal purposes throughout history. As recently as the 1950s and ’60s, LSD therapy was popular in the U.S. before falling out favor amid political pressures and the rise of hippy counterculture and associated street use of the drug.)

We know that there are changes in the way the brain is functioning after people go through this treatment.

Late last year, Dell Medical School at The University of Texas at Austin became one of a small number of U.S. academic health centers with an arm dedicated to psychedelic therapy and research. Its early focus is on military veterans living with PTSD, adults experiencing prolonged grief disorder or depression, and those who have experienced childhood trauma. About 20 to 30% of people with these and other severe psychiatric disorders associated with high rates of suicide don’t respond well to conventional treatment — leaving them in what Center for Psychedelic Research and Therapy co-director Charles Nemeroff, M.D., Ph.D., aptly calls the “circle of hell.”

Groups like the nonprofit Multidisciplinary Association for Psychedelic Studies have advanced early psychedelic research, which has shown these drugs’ promise in improving the lives of people with anxiety, depression and PTSD. But there is still limited understanding of the science behind psychedelics, including such basic questions as predictors of response and dosing — something the center aims to solve.

“We know that there are changes in the way the brain is functioning after people go through this treatment,” says Greg Fonzo, Ph.D., who co-directs the center with Nemeroff. “The nature of those changes and how they relate to improvement, though, are still very much open questions.

“Another thing we know is that there appears to be an improvement in the brain’s ability to ‘rewire’ itself afterward — what we call neural plasticity. It’s basically the process that allows the brain to adapt to new experiences.”

Related: ‘In … Therapeutic Psychedelics, Austin Emerges as a Major Player’ »

The center also plans to explore treatments that combine psychedelic drugs with brain modulation techniques that use ultrasound or magnetic pulses to stimulate areas of the brain, further promoting plasticity. Many of the studies are still being planned, but the center is already hearing from people interested in enrolling — demand for a treatment option that, until now, has not been available in Texas.

Back near Simonton, Thomas has completed two rounds of psychedelic-assisted therapy, including an intensive pre-work period where he acknowledged problems and set goals for recovery, followed by an “integration” phase, focused on processing and applying insights gained during a dosing session. He struggles to say what the treatment has meant to him, but among the words he uses are “a mental and emotional reset.” Hearing him talk, other words come to mind: perspective. Clarity. Healing.

I had to be in a place where my life was going to end if I didn’t go and do this. It’s amazing to think that in the future, people will get the help they need much sooner.

“Before, I felt like a dark cloud was following me around and, at any moment, the entire world could collapse,” Thomas says. “That is a tough place to survive. It was, literally, just survival.”

Kelly Thomas, his wife, sits by his side. She details simpler changes she’s seen in her husband. “He can have honest conversations,” she says. “He has healthier boundaries.” And he’s looking for a new job to supplement his income from a small business. “Before, I felt sure that any job that I got, I would lose,” he says. “Now, that’s different.” 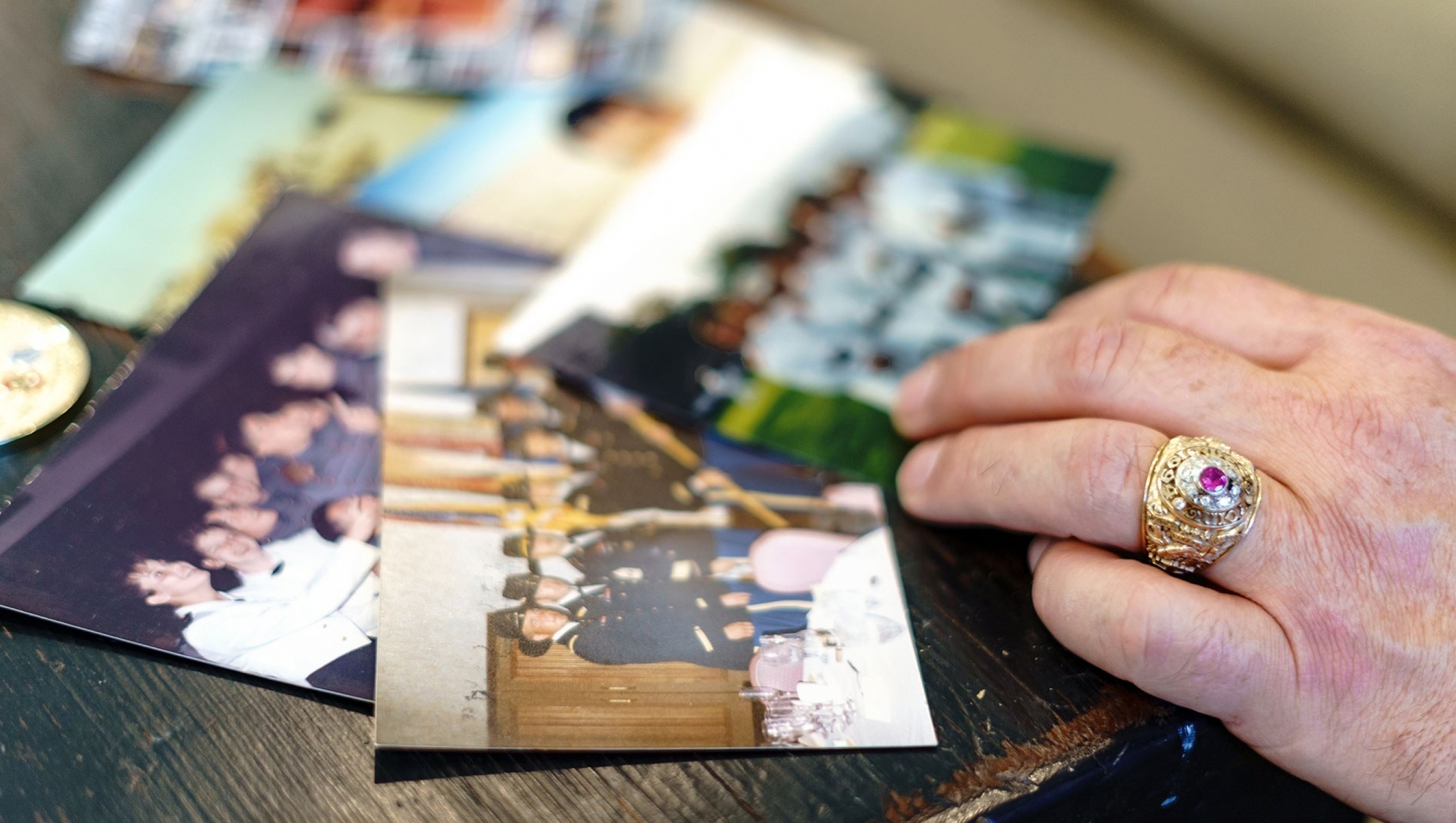 Photographs from Devon Thomas’ time at the U.S. Military Academy and in the U.S. Army.

Both are hopeful that the center at Dell Med will lend legitimacy to psychedelic-assisted therapy so that others in need of treatment have better access. Last year, Thomas traveled to Mexico for dosing; near Tijuana, there’s a house on the beach where a program specializing in veterans offers clinical psychedelic treatment. With the passage of Texas’ House Bill 1802, the Texas Health and Human Services Commission was directed to study the use of alternative therapies to treat veterans suffering from post-traumatic stress, paving the way for psychedelic-assisted therapy in Austin.

“I had to be in a place where my life was going to end if I didn’t go and do this,” he says. “It’s amazing to think that in the future, people will get the help they need much sooner.”

The work of the Center for Psychedelic Research and Therapy is fueled by the generous support of Matt Mullenweg, Alfredo Frohlich, Paul Barnhart III and community members like you. Support also comes from Psychiatry Advisory Board members — champions of Dell Med’s innovation and leadership in the mental health space.