Mitchel and Shannon Wong and family 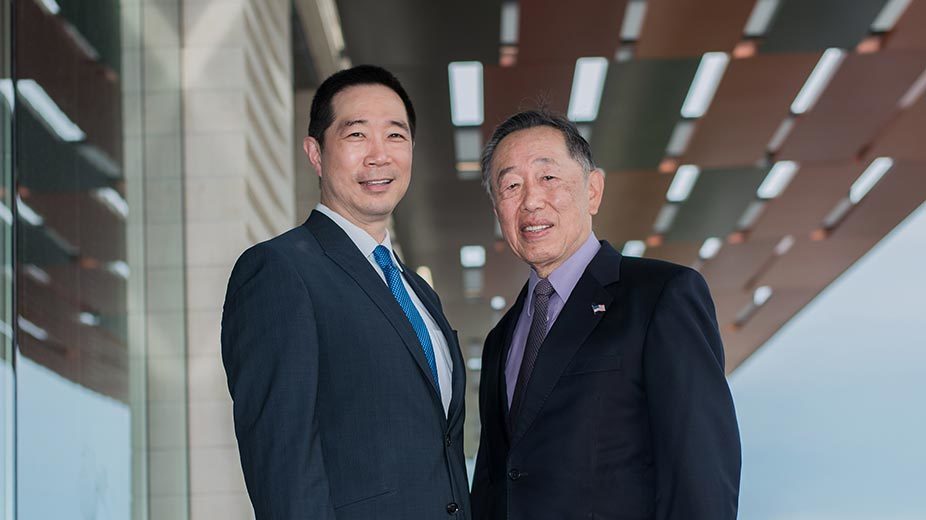 Dr. Mitchel Wong’s life has been all about recognizing opportunities and making important choices. More than five decades ago, the then-University of Texas undergraduate was working in a lab when a young woman named Rose — who had caught his eye as a freshman — happened by, looking for her missing wallet. The meeting led to a date, then marriage and four sons.

A few years later, another chance encounter — this time with a professor in the halls of Baylor College of Medicine — led him to his medical specialty, his first step toward becoming a prominent Austin ophthalmologist.

And four years ago, when Travis County voters approved an initiative to help pay for a medical school, the doctor and his family saw another opportunity. The first new medical school at a top-tier university in almost half a century was opening at his alma mater in the economically vibrant city of Austin.

Mitchel Wong and his son Shannon saw the opening of Dell Medical School as a once-in-a-lifetime opportunity to help create an ophthalmology institute that would help the Austin community and to impact future generations and future medical leaders.

This year, Mitchel and Rose Wong, along with their sons and their families, came together to create a more than $20 million eye institute at Dell Medical School. The institute will bear the names of Mitchel and Shannon, with whom he shares an ophthalmology practice, Austin Eye.

“All the right things came together at the right time in our lives where we could contribute,” said Mitchel, a 1960 UT zoology graduate. “It just seemed like a marvelous opportunity to do this at this time to benefit UT and beyond.”

The Wongs’ gift could fund faculty endowments, a clinical fellowship, a residency program, a research fund, and a patient-care endowment, as well as startup funding for an ophthalmology clinic.

“It’s a once-in-a-lifetime opportunity to leave a legacy for future generations,” Shannon said. “It helps everybody. It helps the community. It helps our immediate family because it sets an example to our children. And helps us pay it forward to the next generation.”

Rose and Mitchel have three other sons, Shawn, Patrick and Michael. Shawn, also an ophthalmologist, has his own practice, Eyes of Texas Laser Center. Patrick is the master photographer at Atelier Wong Photography, and Michael is the managing principal and general counsel at AIM Real Estate Group. All live in Austin.

“Rose and I and our family have talked, and we have the support of all of the kids, so it’s really a family gift that we’re making,” Mitchel said.

He is confident the institute will become a leading center for ophthalmology and eye care in the country because of its location in Austin, Texas, and its association with The University of Texas at Austin’s Dell Medical School.

“There’s nothing that is associated with UT that’s second-rate,” he said.

The grandson of Chinese immigrants, Mitchel grew up in Austin in the family grocery business. The family’s first grocery store was at 714 Red River St., now the site of Bull McCabe’s, an Irish pub.

“I thought about it about five seconds and chose college,” he said.

That choice led him to UT, where he met Rose, a student at the University of Mary Hardin-Baylor who was visiting from nearby Belton. This year the couple celebrated their 55th wedding anniversary.

Medical school wasn’t a given for Mitchel. He initially wanted to become a game warden. His first two interviews for the job went well — all he had to do was wait for a call back.

“They haven’t called yet,” he said. “So I just kept going to school.”

He had an uncle who was a doctor, and so he opted for medical school.

“I knew if I had an opportunity to go to school, I was going to,” he said. “I was going to do my best in school because the fallback was the grocery store.”

Shannon’s path to becoming an ophthalmologist was more direct. He noticed his father seemed to be happy with the career he’d chosen, and he decided to follow in his footsteps.

“He seemed to be having a pretty good time doing what he’s doing,” Shannon said. “So you notice that. I think that’s why a lot of children follow the pathway of their parents.”

Austin Eye, which has two clinics, performed the first LASIK surgery in Austin and was the first to provide laser cataract surgery. Keeping current on the latest innovations in eye care is a never-ending process, Mitchel says.

“There’s not a big epiphany where you change things dramatically in medicine,” he said. “Progress is achieved by the constant pursuit of the elusive goal of perfection.”

“If you’re doing the same thing now you were doing two years ago, you’re out of date,” he said. “You have to constantly evolve and look at what’s over the next hill. You cannot look backward. You’ve always got to look forward.”

Mitchel and Shannon will lend that forward-thinking approach to the eye institute, serving on its advisory council and providing strategic advice to its leadership and faculty about its goals and direction.

“It’ll be a collaborative effort,” Shannon said. “We can add value to their growth and development. And we’ll learn from them, too, so it’ll be synergy.”

He sees the family’s gift as a way to touch the lives of future ophthalmologists and their patients for years to come.

Or, says his father: “It’s like dropping a rock in a pond, which causes a ripple of waves to go out in every direction.”