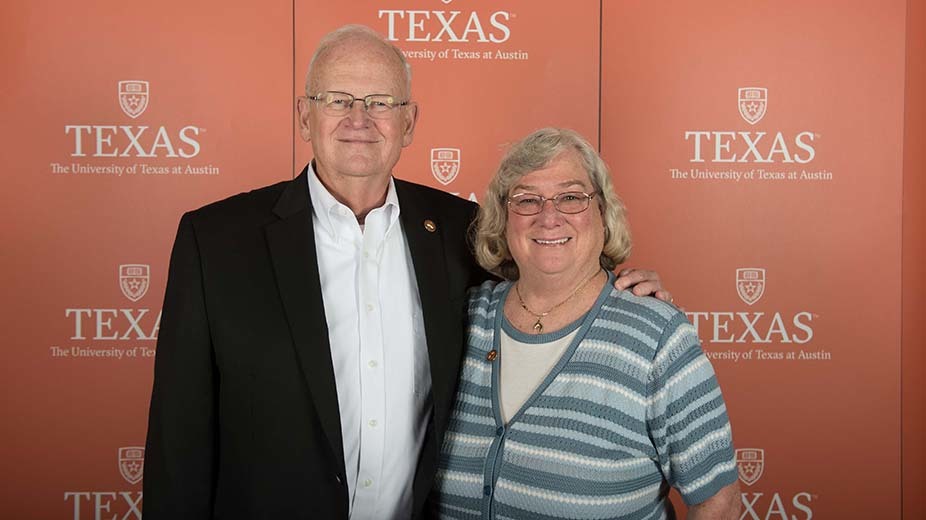 Gifts from Doug Morris and Sue Cox will create a Dell Med outstanding teachers academy and endow the chair for medical education.

Years before she was a Dell Medical School employee — even before The University of Texas at Austin’s medical school existed — Dr. Sue Cox was one of its champions.

Soon after she arrived in town, state Sen. Kirk Watson and leaders at the UT System asked her to help lay the groundwork for UT Austin’s own medical school. Cox accepted the challenge. Working half time for UT Southwestern and half time for UT Austin, she formed community committees and a task force to draft the medical school’s curriculum and start the accreditation process. A Travis County ballot measure to support the medical school was passed in 2012, the school was formally created in 2013, and Cox became one of Dell Med’s first full-time employees in 2014. It’s safe to say she’s invested in the future of the medical school, which welcomed its inaugural class in 2016.

“I’m an obstetrician/gynecologist, and this is my baby that I’m helping to deliver,” said Cox, a primary architect of the school’s groundbreaking curriculum.

“I believe in Dell Med School,” Cox said. “I believe in its mission. Joining this community gave me the opportunity to create something new and innovative from scratch. Not many people get that chance.”

“Sue has been a key architect of the school, designing our highly innovative curriculum,” said Clay Johnston, the school’s inaugural dean, 2014-2021. “With these gifts, we can continue our push to stay at the forefront of medical education and we can acknowledge forever her critical contributions.”

Part of each gift will ultimately come from their estate — Cox and Morris said they hope that others will be inspired to also support Dell Med through estate gifts.

Dell Med’s new Academy of Medical Educators, made possible by the couple’s investment, will reward outstanding medical teaching and training in both classroom and clinical settings.

“There are a lot of great teachers in medical schools and medicine, but they’re not recognized,” Cox said.

Two to four new members will be elected to the academy each year through a rigorous selection process that includes student and peer evaluations, as well as consideration of candidates’ publications and contributions to medical scholarship. Members will carry the title of distinguished teaching professor. The fund’s distributions will support members’ research, innovation and travel to conferences.

Proceeds from the endowed chair, which will be available to Cox’s successors, will be used at the chair’s discretion to support recruitment, retention, scholarship and innovation.

These gifts underscore Cox’s commitment to Dell Med and her passion for medical education, which has been a driving focus of her 35-year medical career.

“Susan is very much dedicated toward the discipline of medical education,” Morris said. “And she has been involved with it ever since she graduated from medical school — she probably even mentored her class at medical school.”

“Medical students keep you on your toes because they’re not afraid to ask anything,” Cox said. “And things that you’ve taken for granted or forgotten, they’ll bring that to the forefront.”

That’s one of the reasons she believes Dell Medical School will improve health care in Central Texas.

“Doctors in the community will be challenged by our school to keep up with the newest things because our students are innovative,” she said. “They’re naturally inquisitive. They’re looking things up. They’re constantly asking thought-provoking questions.”

The benefit to the community was a factor in the couple’s decision to give.

“The more good teaching abilities are recognized and encouraged, the better it’s going to be for the people of Austin,” Morris said.

Cox is particularly proud of the school’s curriculum. The proof of its success, she says, is in the way students are responding.

“Our students are loving it,” she said. “They have learned a lot, and they don’t seem stressed out at all.”

Cox has also overseen accreditation. The school has already earned preliminary accreditation, with final accreditation slated for the beginning of the inaugural class’s fourth year.

Cox, who was born in Honolulu and moved to Amarillo at age 4, attended college on a bowling scholarship. She was good, too; she was ranked 13th in the nation in 1974, and her school team was ranked fourth in 1975. But her heart was elsewhere. She’d worked in an operating room in college and decided to attend graduate school, then medical school.

She earned a bachelor’s degree from West Texas State University, a master’s from the University of Texas Medical Branch and a medical degree from Baylor College of Medicine. She completed postgraduate training in obstetrics and gynecology at Baylor Medical Center and maternal and fetal medicine training at UT Southwestern Medical Center.

If you are interested in setting up an estate or planned gift at Dell Medical School, please call 512-495-5027 or visit Gift & Estate Planning.