AUSTIN, Texas — Trauma-focused psychotherapy is widely considered the best available treatment for posttraumatic stress disorder (PTSD). However, the ways in which this method affects the brain to promote recovery from PTSD are not well understood. In a new study published today in Biological Psychiatry, researchers used neuroimaging to examine how the brain areas responsible for generating emotional responses to threats are changed by psychotherapy.

“We know that psychotherapy works. But we don’t have a lot of good data to explain how it works, how the brain is changed by going through this process,” said Greg Fonzo, Ph.D., lead author of the study and an assistant professor in the Department of Psychiatry and Behavioral Sciences at Dell Medical School at The University of Texas at Austin. “That’s what we sought to find out.” 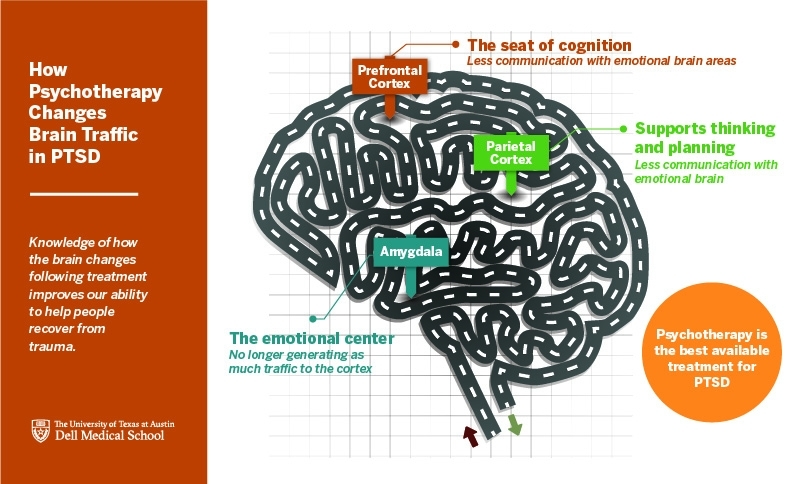 Posttraumatic stress disorder may occur in people who have experienced or witnessed a traumatic event such as war or combat, sexual assault, a natural disaster or terrorist act. Symptoms can include flashbacks, nightmares and severe anxiety, as well as uncontrollable thoughts about the event.

Trauma-focused psychotherapy is a treatment that helps people recover from a traumatic event, using techniques such as “in vivo exposure,” which involves directly facing a feared object, situation or activity in real life, and “imaginal exposure,” which involves facing the trauma memory. A person who is afraid of crowds, for example, may be repeatedly exposed to large gatherings.

“At first, that patient will obviously experience fear or whatever negative emotion is triggered by being in a crowd,” said Fonzo, who also holds a courtesy appointment in the Department of Psychology at UT Austin. “But it’s like looking at a fire from behind a window. It appears to be a dangerous situation, but the person is actually quite safe. After a while, the fire will burn out, and the person recognizes there was no actual danger. And so that process eventually promotes new learning in the brain.”

Fonzo and his colleagues used functional magnetic resonance imaging (fMRI) scans to identify how brain networks communicate with one another before and after treatment. Specifically, they measured the degree of communication or “traffic,” known as functional connectivity, between areas of the brain responsible for emotion and regions of the cortex in charge of logic and thinking.

“What we discovered was a reduction in traffic between these brain regions among patients who had undergone trauma-focused psychotherapy,” said Fonzo. “In fact, greater connectivity changes were associated with bigger symptom reductions. This restructuring of brain communication may be a unique signature of PTSD recovery.”

Fonzo said these findings could change the way doctors treat people who suffer from PTSD.

“Now that we have a better understanding of the brain mechanisms underlying psychotherapy, we may be able to use this information to develop new and better treatments for people with PTSD,” said Fonzo.