Dell Medical School at The University of Texas at Austin has directly or indirectly attracted 415 new faculty physicians to Austin and Travis County since its launch in 2014. This news comes amid a rapidly growing population in Central Texas as well as an increasing doctor shortage in the region and across the state.

The 415 new-to-Austin physicians represent roughly 10% of doctors locally. There are approximately 4,200 licensed physicians in Travis County, according to the Travis County Medical Society.

“When Dell Med launched in 2014, Austin already had a community of excellent doctors,” said George Macones, M.D., interim Dell Med dean. “The medical school is helping to build on that strong foundation by attracting not just top talent – doctors, residents, fellows and students – but also health care leaders who are aligned with the school’s mission and committed to improving health for all.” 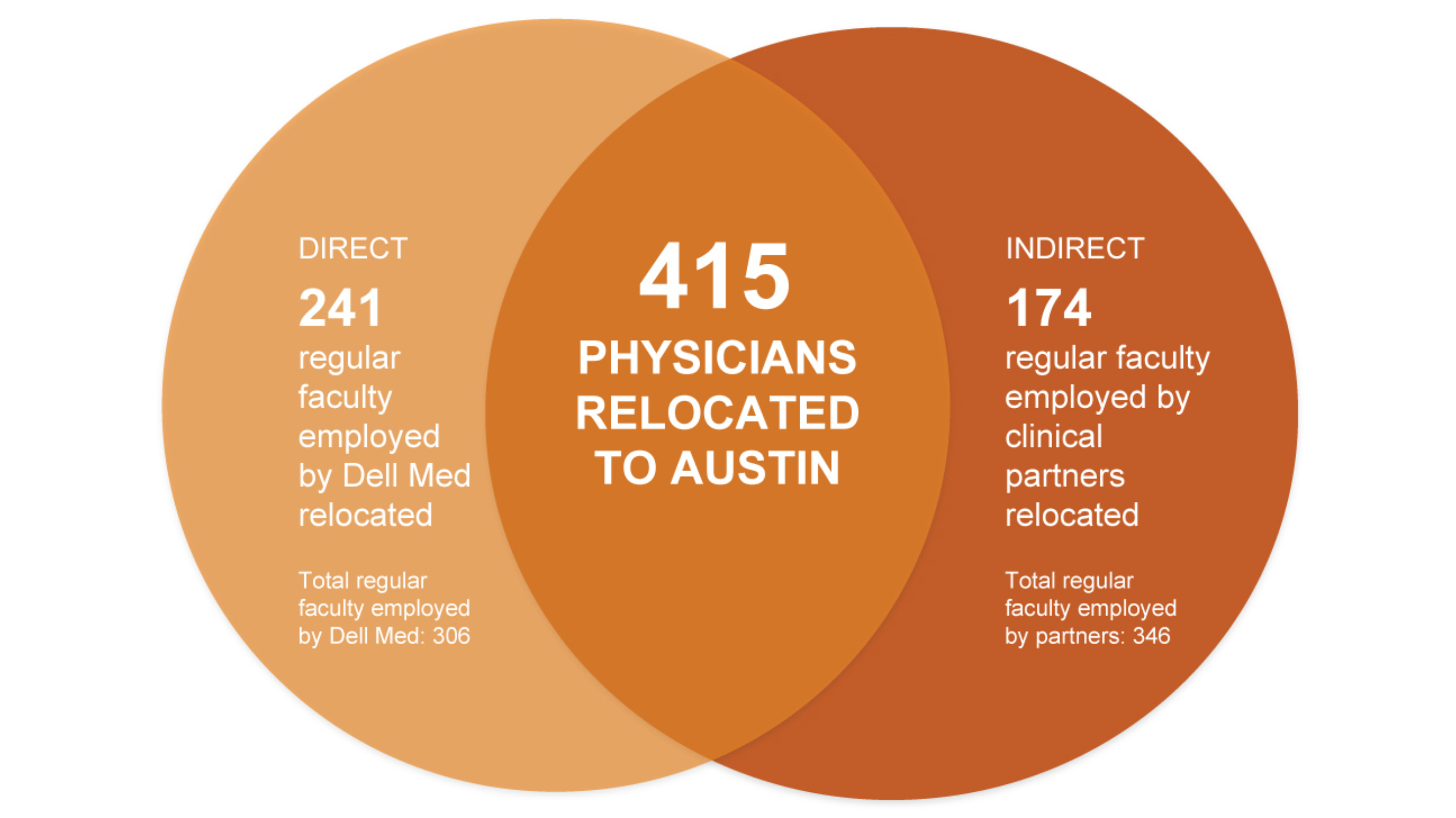 “The University of Texas has long been a magnet for talent, bringing exceptional people to Austin. We’re seeing that same story with Dell Med. Doctors, researchers and students from around the world are seeing what’s happening in Austin and at Dell Medical School, and they want to be part of it,” said UT Austin President Jay Hartzell. “As a result, these outstanding people are offering a level of care to Central Texans that one expects from a world-class academic medical center.” 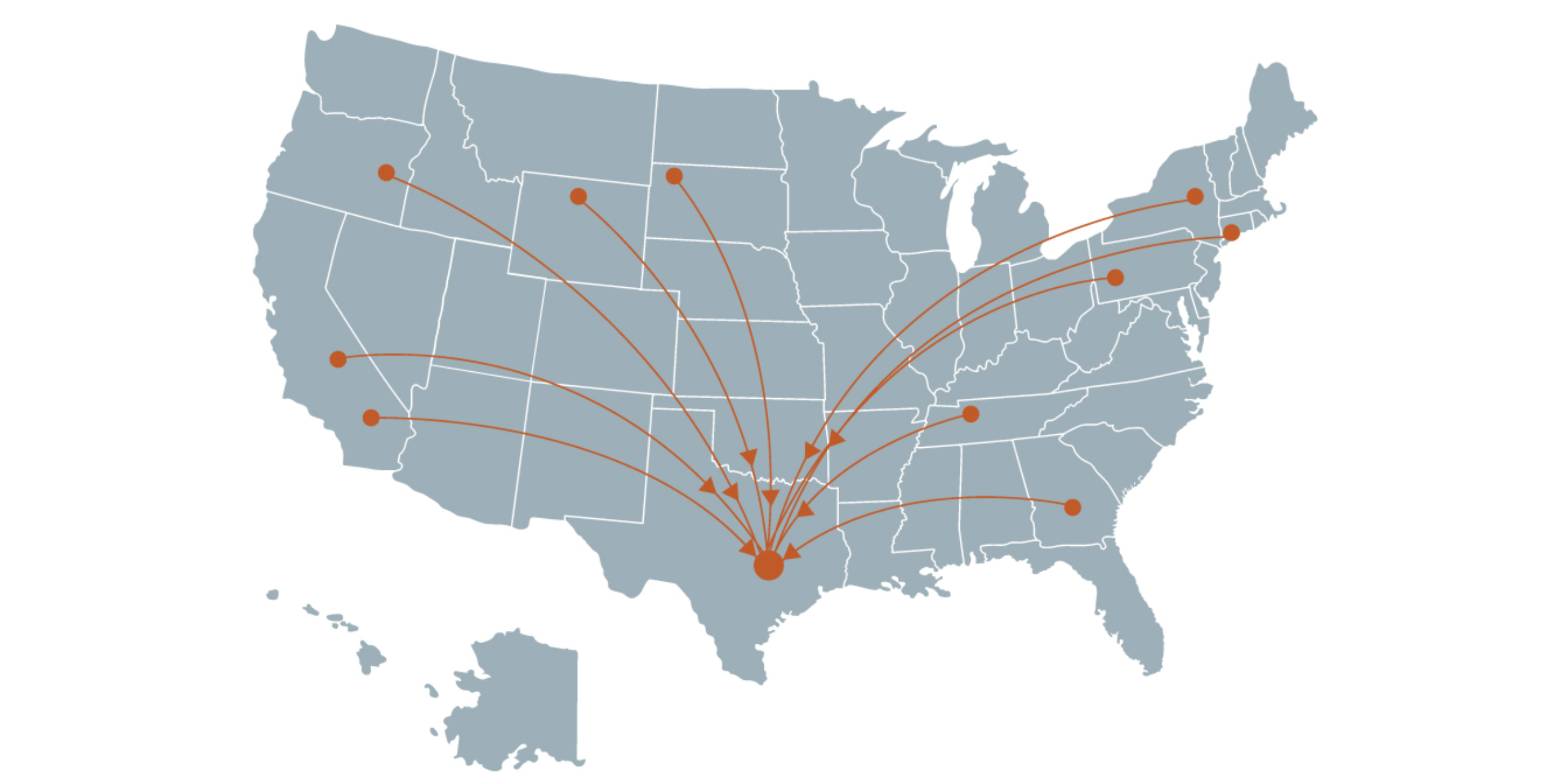 A recent Safety-Net Community Health Needs Assessment Report from Central Health, the Travis County hospital district, also revealed a shortage of physicians across primary care and most specialties – including cardiology, gynecologic surgery, ophthalmology and radiology – that is projected to increase over the next five years. Approximately 130 (42%) of the 306 regular faculty employed by Dell Med specialize in areas of need identified by Central Health.

Additionally, 200 (65%) provide more than 280,000 hours of care annually, including for patients with low income, in collaboration with clinical partners such as Ascension Seton, Central Health-affiliated CommUnityCare Health Centers, Lone Star Circle of Care, Integral Care and others.

Reporting is based on faculty demographic categories defined by the Association of American Medical Colleges due to underrepresentation in medicine.

The 306 regular faculty employed by Dell Med work as clinicians, researchers and educators, or a combination of those, including:

Macones is one of those doctors who relocated to Austin – in his case from Washington University in St. Louis. In addition to his role as interim dean, he’s also a professor and chair of the Department of Women’s Health and provides care one day a week to patients at Southeast Health and Wellness Center, part of the CommUnityCare Health Centers serving uninsured and underinsured Travis County residents.

“What we’re seeing play out is the multiplying effect of the community’s investment in Dell Med,” Macones said. “It started in 2012 with voters electing to create and support the medical school with $35 million each year. Less than a decade later, that investment is paying off and translating into all kinds of examples of successful disease prevention programs, new and innovative models of care, improved health outcomes for patients and better access to specialty care for local patients and families.”

The TDSHS report also finds that physician shortages statewide vary by region, with Central Texas projected to have critical shortages in specialties such as cardiology and nephrology.

Dell Med and its clinical partner, Ascension Seton, are making progress expanding care in both areas. Several recent successes – from developing a fully integrated model of care through the Institute for Cardiovascular Health to establishing a new kidney transplant program – are also making it possible for patients and their families to stay in Austin to get the care they need.

In 2018, one of the world’s leading pediatric heart surgeons, Charles D. Fraser, Jr., M.D., relocated from Houston to join the Dell Med faculty and serve as chief of pediatric and congenital cardiothoracic surgery at Dell Children’s. He led the nation’s top-ranked congenital heart surgery program and arrived with the goal of repeating that success in Central Texas.

In just four years, Fraser has been at the helm for multiple milestones and firsts, including launching the Texas Center for Pediatric and Congenital Heart Disease and building the team responsible for the first pediatric heart transplant in Central Texas, performed at Dell Children’s.

“I chose to be part of Dell Med, Dell Children’s and the Austin community of physicians because of the strengths that each brings to the challenges of improving health care,” Fraser said. “Together, we are advancing pediatric heart care not just here in Central Texas, but globally.”

Fraser’s groundbreaking work spans clinical care, medical education and research. Other Dell Med faculty are focused on one or all of those areas, including working to improve health outside of clinics and hospitals.

Mullen is involved in a wide range of collaborative initiatives, including a patient data collection initiative focused on race, ethnicity and language. She also worked with Austin Public Health to help ensure an equitable response to the COVID-19 pandemic, and she shared her expertise as part of a National Academies of Science, Engineering and Medicine committee that produced a consensus study on the equitable allocation of COVID-19 vaccines.

In the realm of innovative research, faculty such as Elizabeth Matsui, M.D., are working to highlight environmental health, including connecting environmental inequities to racial and ethnic disparities in health conditions such as asthma.

Matsui, who relocated from Johns Hopkins University in Baltimore, is a practicing pediatric allergist-immunologist and a professor in the departments of Population Health and Pediatrics. She’s also director of Dell Med’s Center for Health & Environment: Education & Research (CHEER), which serves as a hub for multidisciplinary environmental health sciences research and learning and leverages expertise from across the UT Austin campus.

Her team’s research found that kids living in Travis County are hospitalized for asthma at a significantly higher rate than U.S. children overall, with the highest rates of emergency room visits and hospitalizations occurring in eastern Travis County. This is leading to further study on the root causes of these kinds of environmental health challenges.

Dell Med Voices: Learn more about the people who tell the story of Dell Med and its mission to revolutionize how people get and stay healthy.