Caring for Our Neighbors: Spotlight on the Central Texas Check-In

For many, the COVID-19 pandemic spelled disaster. Dell Med teams partnered with community organizations and volunteers across Central Texas to reach those most vulnerable.

At the start of the COVID-19 pandemic, some experienced needs they never had before: Masks. COVID tests. Six feet of personal space. But for many, the needs were much more basic — and more dire: Rent. Diapers. Food.

Enter the Division of Community Engagement and Health Equity in the Department of Population Health at Dell Medical School: Having piloted a door-to-door needs assessment project called HoLA (Household-Level Assessment) that relied on community health workers surveying residents and families about their health and social needs, co-leads Marianna Espinoza and Kacey Hanson brought the model to a partnership with the City of Austin to understand the needs of its most at-risk residents in order to route them to resources. 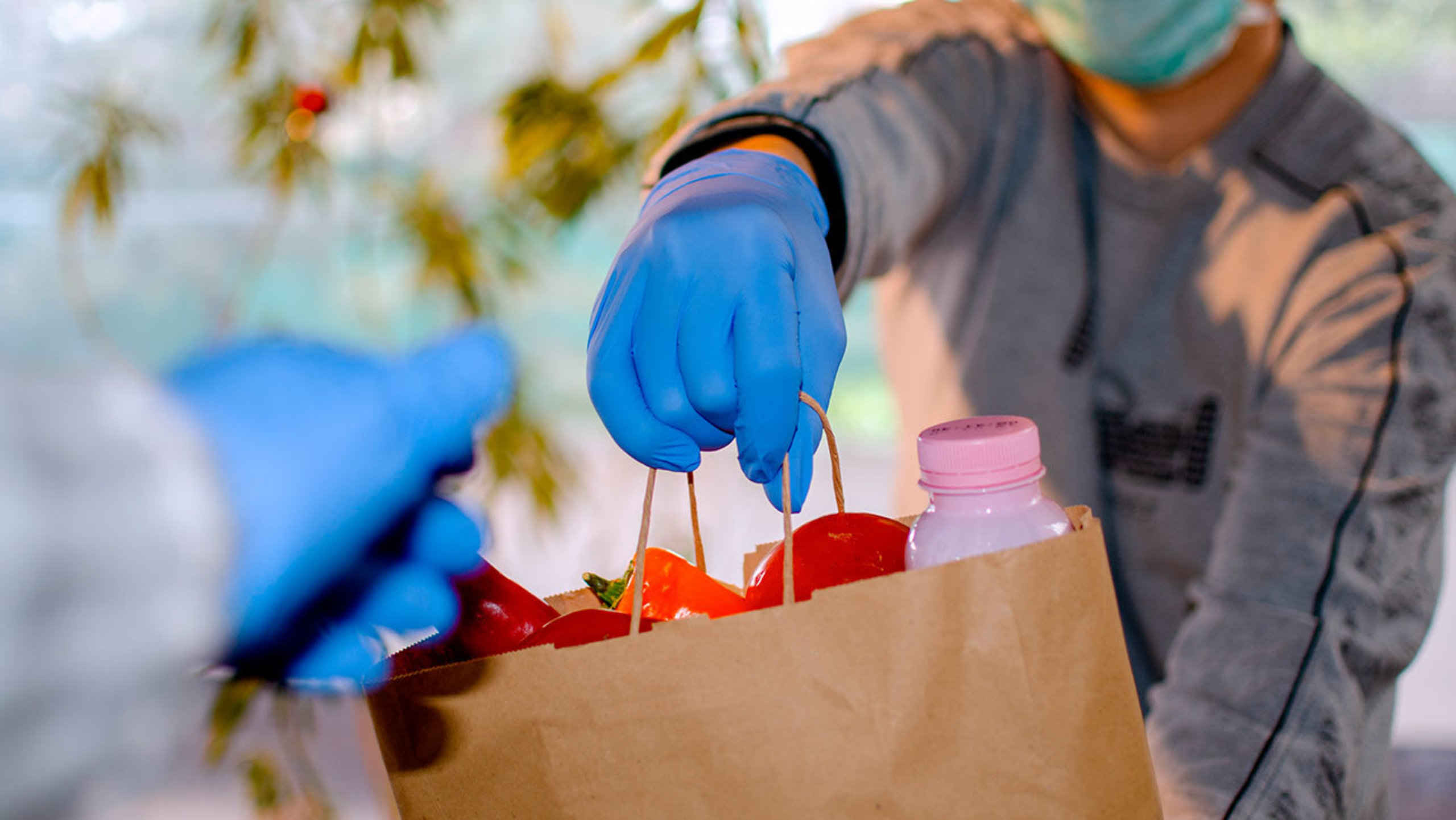 A grocery handoff during the COVID-19 pandemic often involved personal protective equipment, like gloves and masks.

The resulting initiative, coined the Central Texas Check-in, ultimately brought together volunteers from nearly 40 community organizations to survey more than 1,000 residents in both English and Spanish. Prioritized ZIP codes included those in Travis County’s Eastern Crescent, an area whose residents historically experience higher poverty rates and lack of access to health-related resources.

“Our original intent was to be able to visit people in their homes to connect people with a medical home,” says Hanson, a program manager in the Department of Population Health. “That project as it was planned came to a screeching halt when COVID began, but we still could do that work and address social determinants no matter where people were. It became less about their illness, and more about how we prevent the spread of COVID and help people manage this time.”

The resulting data was stark: A quarter of respondents weren’t able to pay their rent or mortgage on time, and of those, 13% reported receiving eviction notices — even during a county-wide moratorium on evictions. The majority of those who received notices were Latina/o/x and Spanish-speaking, and all had a least one person in their household who had suffered a loss in income.

We have to do our due diligence to get the resources out into the community to the people we know need them.

Nearly a third of respondents needed food, and almost half were already receiving food assistance before the pandemic, such as government programs or food pantries.

Similar to the way that the HoLA model supported early contact tracing efforts during the pandemic, volunteers referenced an ongoing list of resources to connect families with local aid. As the pandemic wore on and surges died down, more than 60% of respondents said they received food assistance from traditional sources in addition to food delivery services such as Farmshare Austin, Good Apple or Meals on Wheels.

“The check-in was a critical tool for better assessing the individual and community-wide food insecurity issues resulting from the pandemic-related economic downturn,” said Edwin Marty, food policy manager for the City of Austin’s Office of Sustainability. “The information provided to the city enabled us to focus our resource allocations in a way that would best address the needs in communities most impacted by the pandemic-related spike in food insecurity.”

In 2021, a grant from the Open Road Alliance allowed the check-in to expand to households who primarily speak Arabic, Burmese, Hindi, Nepali and Vietnamese — households often left out of needs assessments. Ricardo Garay, a program manager in the division with experience championing language access efforts, reached out to contacts to hire language access leaders who already worked with Asian and Arab families. These leaders — volunteer translators and advocates within their communities — served in roles similar to community health workers, taking in survey responses and conducting more in-depth interviews with families.

Attempting to reach these populations proved to be challenging. And when they could be contacted, volunteers found that families were, at times, reluctant to share information with a new organization.

“It’s about making connections and build trust,” says Zainab Abdulateef, a biotechnology professor at Austin Community College who volunteered with the check-in as an Arabic translator, interpreter and language access leader. “What’s happening with this work is important. Even if we aren’t able to reach as many people as we want, it’s still progress toward building those relationships.”

It served as an example of how the data can continue to be leveraged — and how ongoing relationships continue to better serve all Central Texas residents.

“Part of what we did was a cultural piece. But there were folks who really didn’t know that these resources existed, and we also worked to serve as a bridge,” Hanson says. “I don’t think that people would think that’s something that we do as a medical school. We don’t have to be the service provider, but we have to do our due diligence to get the resources out into the community to the people we know need them.”