All Dell Medical School Candidates Match to Residency Programs; Almost Half Will Stay in Texas 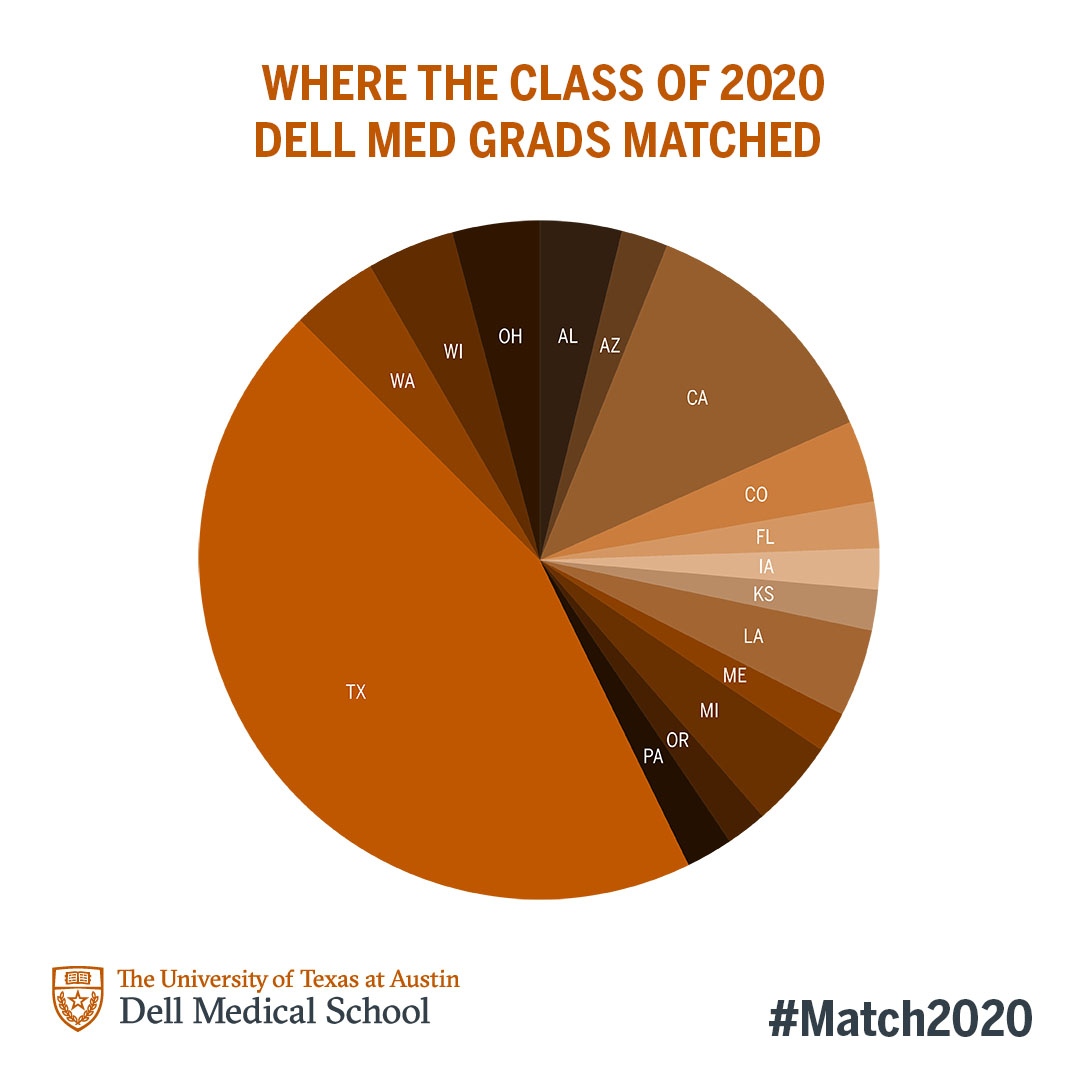 AUSTIN, Texas – The first graduating class of Dell Medical School at The University of Texas at Austin learned today that all students who applied for medical residencies have successfully matched or been placed into programs to further their education as part of national Match Day, and that nearly 45 percent of the Class of 2020 will hone their skills as new physicians here in the Lone Star State.

Among the 49 future medical residents set to graduate this May, 28 will specialize in primary care disciplines including pediatrics, obstetrics and gynecology, emergency medicine, family medicine and internal medicine.

While residents are headed for various regions across the country, 22 will stay in Texas, 11 to remain in Travis County where they will continue to learn from Dell Med faculty as part of residency programs jointly led with its academic medical partner, Ascension Seton.

“This is an amazing feeling, and we are thrilled to head back to a community we truly love,” said Anatoli Berezovsky, who will pursue a family medicine residency at John Peter Smith Hospital in Fort Worth, Texas. A native of Wisconsin, 27-year old Berezovsky taught high school chemistry in Fort Worth before Dell Med. He and his wife were hoping they would spend more time there, he said.

The matches were revealed this morning, when fourth-year medical students across the country opened emails revealing where they would spend the next stage of their medical careers. In light of the COVID-19-related restrictions against large gatherings, traditional in-person celebrations were cancelled among all U.S. medical schools, according to the Association of American Medical Colleges (AAMC).

Stepping up to Fill a Growing Gap in the Medical Profession

The concentration of primary care residency matches among Dell Med students reflects a growing concern about the dearth of these providers across the country. The AAMC predicts the U.S. will face a shortage of primary care physicians by 2032 ranging between 21,100 and 55,200 providers. In Texas, the shortage is projected to skyrocket by 67 percent by 2030.

“Primary care is perhaps the greatest need in the medical profession now and for the foreseeable future, and we are thrilled to see so many of our graduates stepping in to fill the gap,” said Sue Cox, M.D., executive vice dean of academics and chair of the Department of Medical Education at Dell Med.

Highly skilled residents are also a key component of the health care workforce, says Cox. In 2012, 218 medical residents were providing care in Travis County community clinics and hospitals. That number has since grown to 320 residents and fellows as of this January. “Having such a large percentage of our students staying in Austin means our community will continue to directly benefit from the investment it made by voting to create Dell Med back in 2012,” Cox said.

A rite of passage for most fourth-year medical students, the Main Residency Match system of the National Resident Matching Program (NRMP) connects more than 43,000 applicants and 31,000 training positions every year.

Based on a computerized mathematical algorithm, the system considers preferences of both applicants and program directors to produce the best possible outcome for filling training positions available at U.S. teaching hospitals, according to the NRMP. All participants follow the same rules and adhere to the same deadlines. Applicants and programs get to consider all options before making decisions. Not everyone matches, but for those who do, match results are binding.

Continuing a Year of Memorable Firsts

As Dell Med sends off its graduating students to institutions across the country, it will also welcome new physicians pursuing medical residencies. Future Dell Med residents coming to campus this fall hail from medical schools including Stanford, North Carolina, Baylor, UT Southwestern, the University of Virginia, the UT Health Science Centers at Houston and San Antonio, the University of Pennsylvania, Minnesota, UCSF, Yale, Duke and Harvard.

Match Day marks the second medical education milestone for Dell Med this year. In February, it became one of 172 medical school programs fully accredited by the Liaison Committee on Medical Education. The next celebration is set for May when fourth-year students will graduate.