Sunscreen helps to prevent skin cancer, right? Maybe not, at least for some people.

Adewole “Ade” Adamson, M.D., an assistant professor of internal medicine at Dell Medical School, made national headlines earlier this year following an editorial published to Twitter that began with a surprising assertion: For people of color hoping to prevent melanoma, sunscreen is useless. 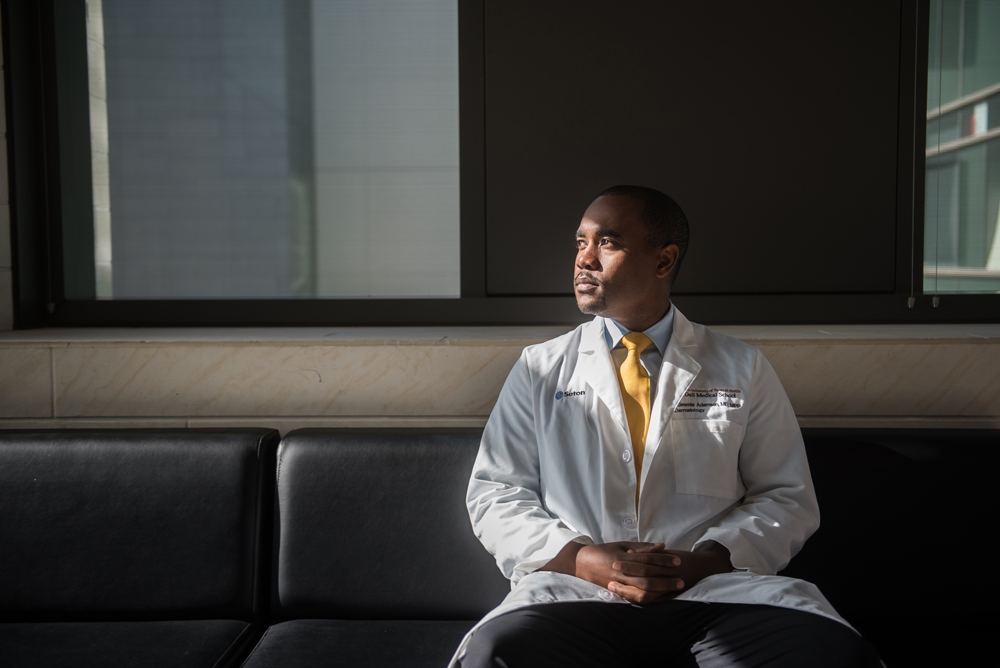 The belief to the contrary is frustrating to Adamson, who first began talking about the problems with broad public health messaging promoting the universal use of sunscreen in 2017. He points to a 2005 study, the largest to date, that found no evidence to support the association of ultraviolet rays — which sunscreen blocks — and melanoma in black or Hispanic populations.

“The current messaging around sunscreen, skin cancer and black people … is just fearmongering with no basis in empirical evidence,” Adamson summarized in the May #tweetorial.

Things got trickier earlier that month, when another study showed that certain chemicals in commonly sold sunscreens are absorbed into the bloodstream at a much higher rate than expected. Where once there was no meaningful benefit, now there are fears of potential harm.

Implicit bias in medicine informs Adamson’s entire body of work. His research focuses on patterns of care for melanoma, the least common but most lethal form of skin cancer, especially among people of color. A delay in care — defined as a gap of more than six weeks between diagnosis and treatment — may lead to reduced survival, a topic Adamson is studying through research sponsored by the National Institutes of Health and the Dermatology Foundation.

“I’m interested in how equitable resources are devoted to all people with the diagnosis,” says Adamson, the lead author of a 2017 study that showed that patients who are not white or are on Medicaid experience significantly greater risk of surgical delay. “We have to figure out who is having delays, does that affect survival and, if it does, how can we intervene?”

The rise of artificial intelligence brings new opportunity for equity in dermatologic care, where machine learning has proved as competent in diagnosing malignant moles as board-certified physicians. But there is danger of bias in machine learning if it only trains on white skin.

Last year, Adamson co-wrote an op-ed calling for machine learning algorithms capable of recognizing melanoma in all skin. In a subsequent article in The Atlantic, he suggested that the ideal remedy to bias in AI is to ensure equitable representation of skin types in clinical image repositories.

It’s a common theme in his research and his approach to care — that representation is critical and that conventional wisdom merits scrutiny. Recalls Adamson of his early medical training: “Rashes and skin cancers can look very different, depending on skin type. But if you look at the textbooks, they’re not necessarily reflective of the people that you see in everyday practice. I realized that there was a deficit there — that some of my learning, particularly about darker skin types, was going to have to be in the clinic.

“If I’m looking at the same textbooks as others but only I’m recognizing that this is a problem, there’s a major blind spot,” he says. “Representation matters. It brings different ideas and perspectives to the table.”

More about Adamson’s research, including links to publications, is featured in Dell Med’s Research Networking System. Find him there and on Twitter @adeadamson.

Category:
Profile News Feature
Share this page:
Back to News