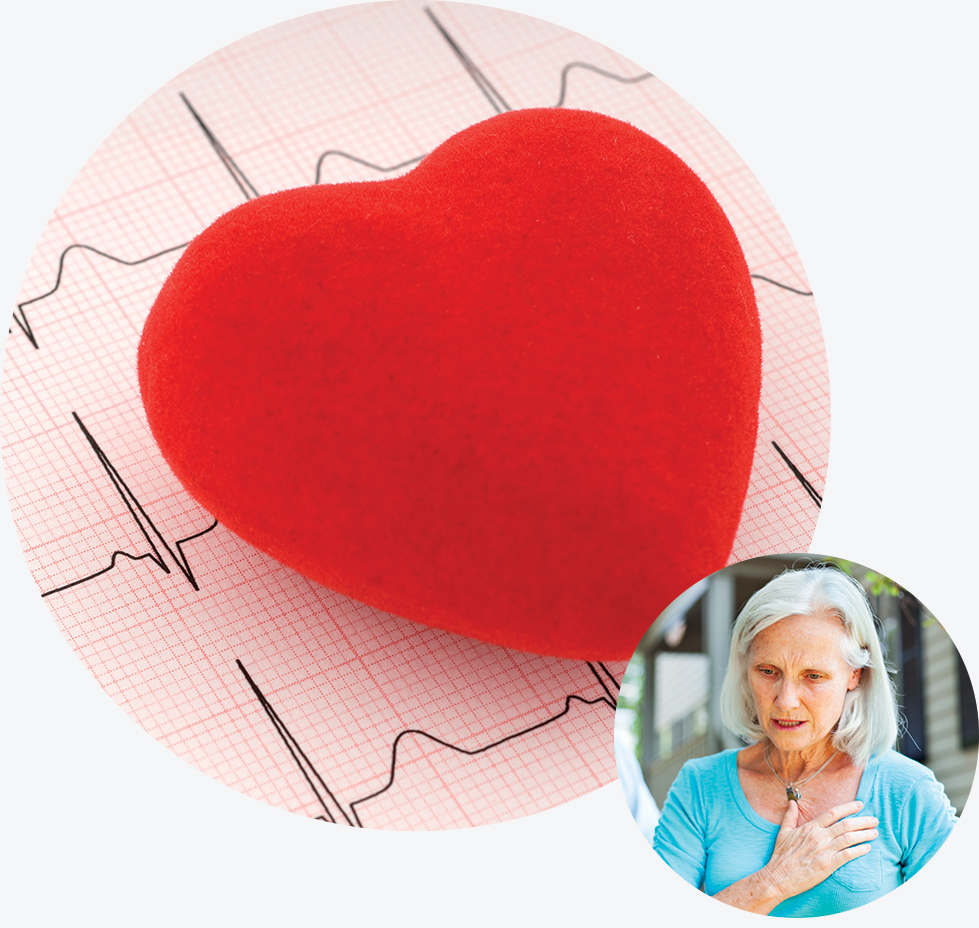 In partnership with Texas Health Catalyst, a new technology that patients can use at home to monitor heart problems is moving from idea to store shelves.

Defining the Problem
What Dell Med Is Doing
Summary

During an acute exacerbation of heart failure, patients are often hospitalized, stabilized and sent home, with little ongoing monitoring by medical professionals. Between regularly scheduled check-ups, the patient may suffer from shortness of breath, cardiac arrhythmias and swelling ankles, all potential warning signs that their condition is worsening. If an immediate appointment with a physician isn’t available, the sufferer may end up in the emergency room, which is costly and inefficient.

Tracking symptoms and reporting them to medical professionals can help people with heart failure live longer, healthier lives, but inexpensive, efficient technologies that can detect heart failure’s warning signs are not generally available to patients.

Rate of heart failure (IN MILLIONS)

5.7 million Americans have been diagnosed with heart failure. The number that will continue to grow as the population ages.

What Dell Med Is Doing

Richard M. Crooks, Ph.D., a professor in the College of Natural Sciences at The University of Texas at Austin, and his multidisciplinary team are developing an affordable, time-saving test for heart-failure patients to use in their homes.

The technology, a home heart failure monitor, is meant to be as accessible for consumers as a home pregnancy test. (Indeed, the team includes Ian Richards, Ph.D., co-inventor of Clearblue, a popular brand of pregnancy test.) It uses plasma levels of NT-proBNP as an indicator of ventricular stretching. Basically, during the early stage of heart failure, a chemical called proBNP gets broken down into two chemicals NT-proBNP and BNP which can then be detected in the blood. Levels of these hormones have been shown to correlate with acute exacerbations of heart failure, so monitoring their levels is critical to determining appropriate treatment.

Enter Texas Health Catalyst, a Dell Med collaboration with the Cockrell School of Engineering, College of Natural Sciences, College of Pharmacy and Office of Technology Commercialization at UT Austin dedicated to supporting researchers, innovators and entrepreneurs in accelerating the translation of innovations to health products. It addresses a critical gap that keeps health innovation from reaching doctors and patients: though new ideas for medical technologies are plentiful within universities, they often remain trapped in labs, as professors and researchers are not equipped with the resources or ability to commercialize their ideas.

After Crooks applied, the program worked alongside his team, connecting them with industry experts and Dell Med and community clinicians who provided assessment of the market for the technology. Because the regulatory environment for health innovation is so complex, Texas Health Catalyst connected the team with a regulatory expert with firsthand experience working with the U.S. Food and Drug Administration.

The program also provided product design consulting through the Design Institute for Health and made an introduction to the National Science Foundation’s I-Corps program, which prepares researchers how to efficiently and effectively advance through the commercialization process.

As a result of their efforts, the team recently secured $2 million in funding from the National Institutes of Health for further research and product development.

Products Created by Universities in 2010

The Trouble With Translation

According to a 2012 paper by the Center for Technology Innovation at the Brookings Institution, 5,000 licenses and options were executed by universities in 2010, but only 648 new commercial products were taken to market.

Collaboration between innovators, including UT Austin professors and researchers, and Texas Health Catalyst brings to market products like the home heart failure monitor monitor that can improve clinical outcomes, reduce costs and enhance the experience of patients, families, caregivers and health care providers.

The program helps streamline the innovation process to advance medical solutions with the end in mind: addressing real-world patient health needs in an efficient and effective manner.